This, all and more, has been the feature of the most recent 4 months of my life.

To be fair, this Yin and Yang is going on ALL the time for ALL of us, and most of the time we don’t notice the peaks and troughs, the ebbs and flows – EXCEPT when we do! 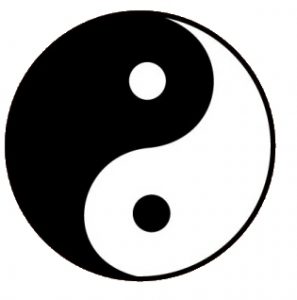 And we only notice, our attention is drawn to the major/minor balance in our experiences, when there seems to be a less than random or cyclic flow to things.

And because we ARE ONLY human after all, we find ourselves noticing the runs in sequences of DOWNS far more than the UPS.

This was how it happened for me – round about the time I overdid it in terms of some sporting action. The weather was hot, I’d done some strenuous activity for two days and then spent a lot of time on my feet on the third day as well.
It was on the third day evening that my physical body began to shut down, crying out loud enough for me to hear – “Enough IS enough, Matey. You’ve overdone it, and this now is the wakeup call.”

Although my awakening to physical frailty was only in extremis for five days, I subsequently took things easy for much longer. And that was where the other rot began to set in.

In the midst of lots of simple and regular everyday stuff, I began to notice – and pay more attention to – things I would normally look upon with a grounded understanding and an objective eye.

Bit by bit, I began to arrive at conclusions I wouldn’t have previously arrived at. More and more I would trip over bits of mental baggage, as I plied the daily pathways.

My relationship with my thinking took a turn to the dark side – I began to believe my thoughts 100%.

I began to take many more things personally. Lapses in memory, everyday things forgotten, became more than random happenings of a busy-minded person – they became categorised and catalogued. I increasingly noticed every time I was criticised, judged, questioned.

EGO was under attack – and when ego feels under attack, then ego fights back for one’s self.
Ego became defensive, aggressive and, on occasions, very angry.
On the battlefield of the Outside-In nature of reality, the responsibility for the slings and arrows of outrageous fortune is ALWAYS with the world and, in my particular case, the people in it. It’s their fault for doing that to Me. It might start out as unfair or insensitive, yet the Horse gallops off and takes common sense with it.

When ego takes the reins of the Horse of Our Life and hangs on to them for too long, then things not only look apocalyptic – they very soon, in perceptive reality, become apocalyptic.

We might ask ourselves at some point, with blinding rhetoric, “Am I losing it?”

And in the midst of apocalypse, every answer we notice whispers Maybe, at first, then finally Yes.

In the end, this entire manic gallop came to rest in a “swamp of despair” that bore a remarkable resemblance to what John Bunyan described in The Pilgrim’s Progress as being “The Slough of Despond.”  * (pronounced Sluff)

The Slough of Despond

Without quoting Bunyan’s scary and indeed apocalyptic words, I can aver to this place as being where the Soul can feel – and be – abandoned.

Some may scoff at this declaration, saying that, “Surely the Soul cannot feel and be abandoned. What a ridiculous notion. The Soul is infinite, is eternal.”

I can also aver to this place being a “clearing house” for our state of mind and associated emotions.
It is like a quicksand – either you sink in deeper or you get pulled out.

Sinking in deeper will lead to depression and worse.
Getting pulled out will require some resource or other.

One of the awful and tragic things that is brought about by riding headlong into The Slough of Despond, is what becomes of the Horse of Our Life in that dreadful mire.
There are many metaphors and images that can spring to mind, as the Horse struggles to carry us back to safety. Yet, how true it is when we find that the life we lead cannot and will not bring us out of the Slough.

Some Resource or Other

There are resources, needless to say, that will enable us to be dragged from The Slough of Despond. These are the lifelines afforded to us, that are NOT always governed by knowledge, understanding, wisdom or common sense.

One of the lifelines is to abandon the Horse. By this I mean, that we extricate ourselves from our previous life, some or all its trappings and everything about it. However, some people might not want to abandon their way of life – and there’s a similar and graphic metaphor about how we might get ourselves out of a car that has been driven into the sea, a lake or a river.

We might break ourselves free of the Horse, stand on its back and jump to safety. We might then be able to rescue our own Horse as well.

Another lifeline is if someone Sees Us. We might hope that the someone has enough concern or resource of their own and have the will to throw us a lifeline. However, few people will either see or hear us. The Slough is a personal and silent place of our very own. We rarely, if ever, cry out for help … something I discovered at a very young age when exposed to drowning in a swimming pool. I might have waved and floundered around but calling out was not my intuitive action.

Another resource is Time. This is not THE most reliable of resources, since it is the gravity of thoughts, fears and judgements that weighs us down, pulling us deeper into the mire.

However, by lightening the load of our thoughts, fears and judgements we can shed some of the burdensome weight, allowing us to crawl nearer to safety. Of course, our lifestyle and trappings will be part of the equation too, which will play into this.

You may have some of your own considerations and conclusions about resources here too.

However, there is a caveat I will offer up to you.
When it comes to The Slough of Despond, then “Knowing Thyself” is the most distant of resources. We find our cupboards full of self-knowledge and self-understanding, of wisdom and grounded wellbeing, have been stripped bare. What was there yesterday has gone. When we are gasping for breath and flailing in the quicksand, our inner resources are removed from view in their usual place. We still have them, but our Soul will have laid them up, by way of preparation, into a place of safety.

With my own recent journey, there were many questions related to “Am I losing it?”

Some were related to mental degeneration, a not unserious question in terms of my age, loss of synaptic connectivity, referential evidence of my own mental lapses and those evidenced by others. The instances highlighted in The Confession – “Left undone those things I ought to have done,” “erred and strayed like a lost sheep,” and “there is no health in me.” (NB – I’m not a religious person!)
Taking my “eye off the ball”; letting people down – both in my own judgement and being told so by others; being unable to let go of a persistent feeling of anger; having a sense of being mentally rendered down by complaint and criticism; and a catalogue of other instances.

As the Yin and Yang came and went like waves on the shore, it was a journey that was the best of times and yet also the worst of times.

Every journey we are on in Life WILL throw stuff at us out of the left field, and a reasonable smattering of curveballs. We ARE human, however – and we are not hermetically sealed from the things we come into contact with. Because we have nerves, there are always SOME nerve agents that are going to affect us. These affects are cumulative and can often come from the kindest, most benign and respected of sources. We need to be both vigilant AND honest with ourselves and others – and we also need to see the tell-tale signs in ourselves and others.

Finally, to those who really do care, I’d say just this …

“In terms of Respect – our Soul Commands though never Demands.”