There’s a subtle power encapsulated within NLP that seems to defy science – which is reflected in the way that science cannot seem to prove what NLP is. We all have an idea of what NLP does, and what it can do in conjunction with other elements within the hypnotic domain, yet science regularly demands that NLP be defined, rather than defy!

I believe that the subtle power embedded in NLP plays out – for each of us – at a neurophysiological level. To put it simply, it is how the communicative power of language acts upon our minds and bodies, both in a conscious and cognitive way as well as in a more unconscious (outside of our attention) and intuitive/connective way.

I have often experimented with creating Hybrid Processes by mixing certain routines, and then running them for clients just to see what might happen – mainly because there’s always something going to be going on!

Probably my most notable experiment was called “Watch your own performance.” This was where I took a cricketing batsman, in a practice scenario against a bowling machine, and asked him to imagine – while he continued to practice and hit balls – that he was observing himself batting from a position some 10-15m away. To do this he had to dissociate from the action he WAS doing, which elicited a range of interesting comments, responses and subtle inner adjustments to the way he was playing. In summing up, I described it as –

“He was able to improve the quality of his batting from the inside-out by first dissociating, and then opening out his focus through spatial re-association.”

You can read my article on this experiment here:-
http://pjwhypno.blogspot.com/2012/02/watch-your-own-performance.html

So, what might happen if I mixed the linear nature of the elements in the Cognitive Cycle with the concept of Perceptual Positions by using the spaces within a room?

This came as a 4am message from out of the blue, as I woke up to a call of nature – there was this idea, in my conscious in-tray, waiting to be considered. So, I expanded some branches of the ideas and concepts, and came up with an experiment that I ran later for one of my clients.

In a large room I placed four chairs in a semi-circle facing a large empty box on the floor.
I labelled the box – THE WORLD.
I labelled one chair THOUGHT, the next FEELINGS, the next, JUDGING and DECIDING and the last one, ACTION and BEHAVIOUR.
In front of the first two chairs, on the floor, I put the label – WHAT IS IT THAT’S HAPPENING?
In front of the third and fourth chair, on the floor, I put the label – HOW SHALL I RESPOND?

Now, my client knows about The Cognitive Cycle and how the Power of Language links all the elements together. Also, he understands that how we experience the world and respond to it is simply represented by Our Relationship with Our Thinking. He is very well versed in the theory and practice of all of it.

So, when he arrived for our latest session and he saw the Experiment laid out as I’ve described, he was intrigued as to what might or might not happen!

We would do well to remember that our feelings are generated from thought processes, for often there is such a high-speed link between our thinking and our feeling that it seems like the other way around. It is always the Egg!

By opening up this cycle to being represented by two separate chairs (thinking and feeling) in a space in a room, the Relationship immediately becomes a lot clearer! 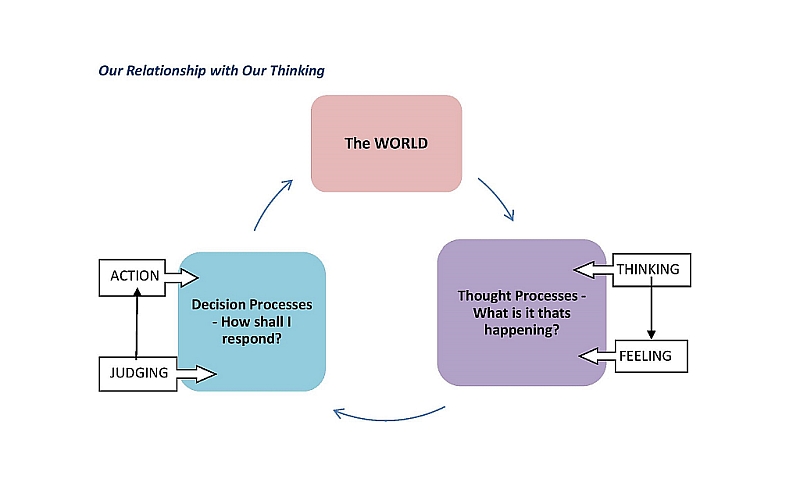 Another bit of by-play in this physical representation, is to put a couple of little cushions – labelled MEMORIES and BELIEFS & VALUES­ – into the “Thinking” chair.

For when the client then sits in the “Thinking” chair, they also get a felt sense of how our Memories and Beliefs & Values play a vital role in how we filter the contents of our Thinking!

Next, I took my client through some specific examples of how he receives instances or stimuli from (the box labelled) The World … out there.

It started with his being sat in the THINKING chair – being pushed and nudged into a certain posture by the cushions of Memory and Beliefs &amp; Values.

By asking him “What’s Happening Here?” I got him to evaluate, as best he could, just his thinking around this particular stimulus.

Then I quickly moved him to the FEELING chair and asked, “And what’s Happening HERE?” getting him to evaluate what and how he was Feeling as a result of his evaluations from the THINKING chair.

With those feeling evaluations fresh in his mind, I moved him back to the THINKING chair.

“OK – look at the FEELING chair and, tell me, what are you NOW getting from what you experienced sat in that chair?”

After his responses, I then asked him to stand next to the box labelled THE WORLD, and I got him to tell me what he’d evaluated – from this perspective – from observing himself at, first, the THINKING chair and then, secondly, the FEELING chair.

I then asked him to go and sit in the JUDGING chair – look back at the WORLD – and give his objective and impersonal evaluations of this particular stimulus, from a Judging perspective. His responses were calculated and dispassionate.

“Now that you’re assessing how to respond to this stimulus,” I said, “when you are ready go and sit in the ACTION chair. When you’re there, then tell me what responsive action you’re going to take.”

This he did, and finally I got him to go and stand next to THE WORLD and see himself taking the Action that he had Judged would be the response to make.

“What does THAT look like, from the perspective of you as observer, standing there at THE WORLD?”

“Interesting,” he said. “I need to spend less, or as little as possible, time being sat in the THINKING chair. In terms of the things I’d like to change – if I could, quickly, go straight from THINKING to JUDGING then it would be a lot better.”
“If you could move one of the chairs out of the circle which one would it be?” I asked.

“That one,” he said – pointing at the FEELING chair. “All the reasons for me taking the choices I have done in the past, are from what I experienced in the FEELING chair. If I had felt nothing, then I’d have made a different Judgement as to what to do next.”
“That’s great,” I said as I picked up the FEELING chair and put it at the back of the room. “Let’s see what happens NOW.”

I asked him to stand by THE WORLD and imagine the same particular stimulus as being presented to him. I then directed him to go and sit in the THINKING chair. “What’s gone on NOW, in that chair?” I asked him. Amusingly, he asked if he could do without the cushions! “OK,” I said. “Put them on the floor and tell me how different the chair is without them. Then tell me about how this stimulus presents itself to you NOW.”

Without the cushions he was able to occupy the THINKING chair in a different posture. He discovered that his evaluation of the stimulus was quite different, much more neutral.

Then, without any more ado, he moved on quickly to the JUDGING chair and started smiling. It was the kind of smile we often make when experiencing lightbulb moments.

Somewhere, in the gap between the THINKING chair and the JUDGING chair, was the arrival of a whole raft of recognition and understanding.

And, rather like some of the lyrics of the Joni Mitchell song Both Sides Now, once we start looking at THE WORLD from a number of perspectives, using space and chairs and cushions and labels, then something that altogether seems to defy science emerges from the particular illusions that we had once created for ourselves.

There’s a subtle power encapsulated within NLP that seems to defy science and what it can do in conjunction with other elements within the hypnotic domain! Is it how the communicative power of language acts upon our minds and bodies, both in a conscious and cognitive way as well as in a more unconscious (outside of our attention) and intuitive/connective way?