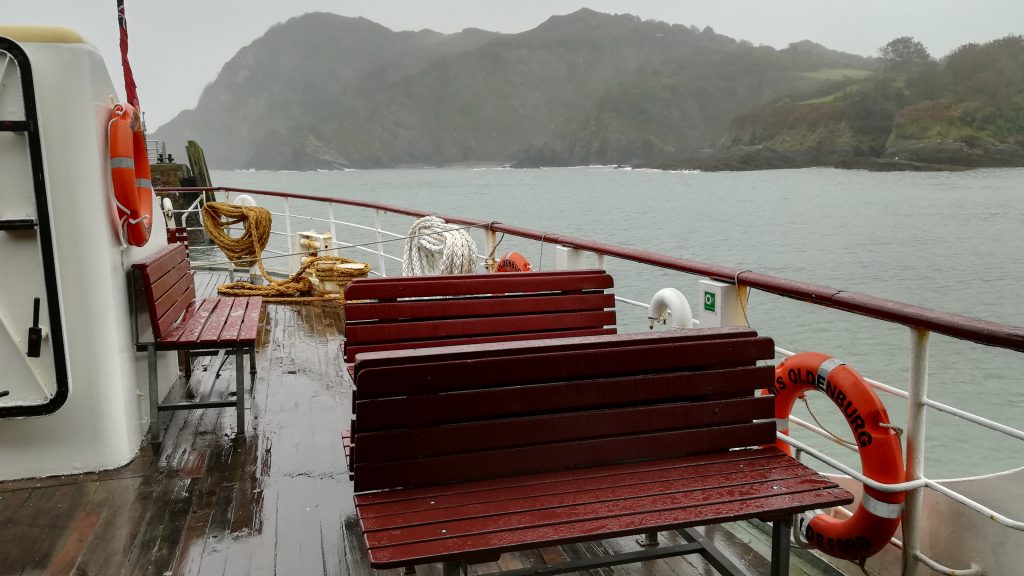 At 9.15am last Saturday morning (7th October, 2017) I made my way to Ilfracombe Harbour. I had booked a day trip to Lundy Island, travelling by the MS Oldenburg across 23.5 miles of first, the Bristol Channel and then, once beyond Morte Point, the Atlantic Ocean. 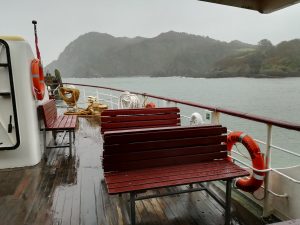 Having seen Lundy from our North Devon coast over the years since I first came here as a boy in 1955, I had never once set foot on the Island. This day would change all that, and I had had my ticket booked for about ten days and, as this Saturday approached, I had watched the local weather reports with anticipation, and monitored the daily sea state with as much vigilance.

The final forecast I appraised said that the day would start with rain, and a strong wind, but that these conditions would improve through the day and, by afternoon, there should be less breeze and sunny intervals. “Sounds pretty good,” I said to myself as I’d packed my backpack, charged the cameras, and got the waterproofs ready.

At the harbourside there was that somewhat familiar coastal wetness – a fine, misty rain, blowing through in horizontal sheets.

“I’ve dressed well for this,” I thought as, along with around 70 fellow passengers, I boarded the vessel. The journey is scheduled as approximately two hours long and, with us sailing into the westerly wind, I decided to stand by the port side but under cover – looking out at the rather more exposed seats that can be seen in the picture. It was raining, of course, so I was being prudent!

We sailed out of the calm waters of the harbour and very soon I began to experience a considerable challenge to my relationship with my thinking.

I have always been a good traveller by land, sea and air, from a very early age. I am reasonably blessed with resilience in that department – which is exactly why I had strolled to the harbour earlier without a thought for the state of the high seas on this day.
“If it is too bad,” I thought, “then the Captain just won’t sail.” This rational conclusion is an absolute given, when made with the certainty of good old terra firma beneath one’s feet.

A good friend had mentioned that with the Oldenburg, having just a 1.65m draught, I would notice every pitch, yaw and roll. A very detailed technical warning – which started to echo around my mind the further we got away from the shore.

Soon, due to the driving misty rain, we lost sight of the shore and – my friend was right – the little ship’s motion was a description of every wave that passed by.

“Blimey!” I thought. “What have I let myself in for?”
As the vessel pitched into the canyons between the waves and then climbed the peaks, I watched each wave disappear out of sight in our wake. Many of these were above my eyeline, so some of the troughs were deep. Occasionally we would also roll from side to side, which would throw the bow spray right along the length of the ship. The hood on my anorak went up straight after the first back-of-the-head wash!

“The sea condition today is moderate and occasionally rough,” came the announcement over the Tannoy. My internal dialogue’s reply was “Occasionally? You’ve gotta be joking, Mate!”
In fact, to be fair, the assault on the state of my inner dialogue – the condition of my relationship with my thinking – was metaphorically parallel with that of the sea. And the sea was unrelenting, especially once we were out in the Atlantic – the white horses were everywhere and just kept on coming.

And all the while the horizon was just a white, indeterminate wall, of driving, misty rain. There was no visible reference, except the waves we HAD encountered, retreating into the distance.

Inside Out and the Thought Horizon

One of the features of the Inside-Out nature of reality is what I would describe as the Thought Horizon. When we are overwhelmed by the incessant torrent of our thinking, then it is easy to experience everything coming at us as nothing but Outside-In. When this happens, we lose our Thought Horizon – we have no points of reference we can use to orient us. It is rather like snow-blindness – or, as I was experiencing this Saturday morning – being tossed and turned in rough seas in a cloak of misty rain, driven by a strong wind.
“The world outside is throwing stuff at me – and what I am feeling on the Inside is caused by what is happening on the Outside – and I cannot see the wood for the trees.”
The metaphors are endless – when we have no Thought Horizon.

I reminded myself that there was much to observe and take in here, and whilst my mind may seem to be racing, that I was not here on this deck, on this morning, without good reason. I looked at the faces and demeanour of the crew and the unaffected, intrepid travellers I was sharing this experience with. I certainly had more in common with them than with the poor souls whose heads, and stomachs, were really spinning! In those moments I noticed I had regained some reference points on my Thought Horizon. With almost reassuring speed, I felt grounded – and whilst the thoughts kept coming (because they do), my “ship” was now negotiating the metaphorical journey in a more familiar and much better way.

Interestingly, the return of my Thought Horizon coincided with an improvement in the weather – on the real Outside! The rain had stopped, the clouds were lifting, and I could now actually look towards the bow at the approaching waves and watch the infinite variety of the rise and fall of the sea as we passed by the peaks and troughs. The actual horizon was now more distant and had noticeable features too, plus the sea was far less intimidating. 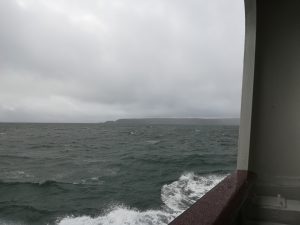 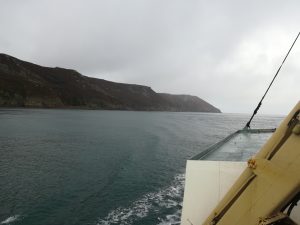 We were soon rewarded as Lundy Island emerged from the receding and broadening horizon, and it was time to continue with the rest of our day.

For me, already, there had been exhilarating adventure, a challenge, some noticed insights, and a return to a state of grounded composure – plus the metaphor of The Thought Horizon had been revealed to my catalogue of experience!