The Wright Way / Uncategorised / Gateways and The Zone

Gateways and The Zone

Peter July 24, 2015 Post Comment Uncategorised
The
Search
I’d always had a desire to find the doors to The Zone, locate the key or keys, and
then unlock the doors that the keys fitted. The fact that flow states of peak
performance existed, meant that they had to be accessible more than just by
chance. It seemed, to my mind, that certain factors were relevant and others
were of peripheral importance, and some were just red herrings.

The
Way and the Way

Then I returned to Zen and examined the Gateless
Gate, and I realised that I was looking in totally the wrong direction –
and the wrong way – with my metaphor of keys unlocking doors! And there is no
repetitive ambiguity here in my using both “direction” and “way”, for in this
regard I take them to mean two quite different things!
For I see ‘direction’ as
being orientation; and ‘way’ as being the manner in which I was looking.
Of course, once I perceived The Zone as NOT being behind doors which needed unlocking, then
shapes shifted and new meanings coalesced.
For me the concept within Taoism of Wu
Wei – or effortless action – became enriched with knowledge and
comprehension.
Wu Wei refers to the cultivation of a state of being in which our actions are quite effortlessly in alignment with the ebb and flow of the elemental cycles of the natural world. It is a kind of “going with the flow” that is characterized by great ease and awareness, in which – without even trying – we’re able to respond perfectly to whatever situations arise.
I noticed many practical instances of how people’s
lives – on both a macro and a micro level – were changed, purely by their
opening up and liberating themselves from their own seemingly unseen
barriers.
I also used my role as a coach to facilitate that
opening up, so that my clients, athletes and players, could gain an
understanding … from within a sympathetic training ground ethos and
philosophy … of there being an infinite number of possibilities.
Curiously within that infinite number, there is not
one that involves your learning about how to “do”
effortless action. In The Zone you
always know what to do and when and how to do it.
So, in terms of liberating the Self, what is the
nature of the barriers? 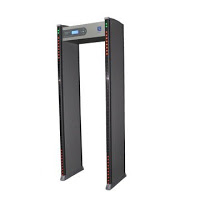 Look at the metaphorical analogy of the security
gate at an airport. It is – for all intents and purposes – an unseen barrier.
Oh, it may look like a doorway with no door, yet there is an invisible field
where alarms go off when we try to pass through carrying certain types of
baggage or effects upon our person.
It is a Gateless Gate, wrapped up in a modern
disguise!
In terms of sports action (or other life
performances) where we want to do well, be liberated from our own shortcomings
– to throw off our own shackles even – we need to let ourselves ‘take flight’.
In order to board this flight, it is necessary we pass through the security
gate and have our baggage and effects
checked.
Now here is where we contradict ourselves, since
there IS no room for baggage on the field of play. It
gets in the way and clutters up all our pathways to playing to the best of our
abilities. The boxing ring, tennis court, the football field, the snooker table
– or indeed any arena you may care to consider – all get metaphorically filled
with our ‘thoughts and issues.’
Imagine you, or your team, take even just kitbags onto the field of play. There
will be times in the contest when you’ll find yourselves tripping over them. Add to the kitbags all those cartloads of issues everyone
seems to have in their lives, and then the space will really be getting filled
up and cluttered.

Your game – however good or skilful – will then just have no chance to express
itself.

Now you may disagree with this metaphor, or question
the validity of the idea of our ‘mental baggage’. However, why is it that we
can’t do things right some days? How is it that we’ll play poorly at certain
venues, or get ruffled by certain opponents, referees or umpires?
“I couldn’t concentrate today – my head
wasn’t in the right place.” How familiar does this sound?
Yet, take a look in the mirror – see, your head is still there on your
shoulders isn’t it? So what made it FEEL like it wasn’t in the right place?
Yep – you’ve got it –

(Extract from Gateways to The Zone – Pathways to Peak Performance )
http://www.amazon.co.uk/Gateways-Zone-Peter-Wright/dp/1291705295/ref=tmm_pap_title_0