The Wright Way / Uncategorised / Playing Outside The Box 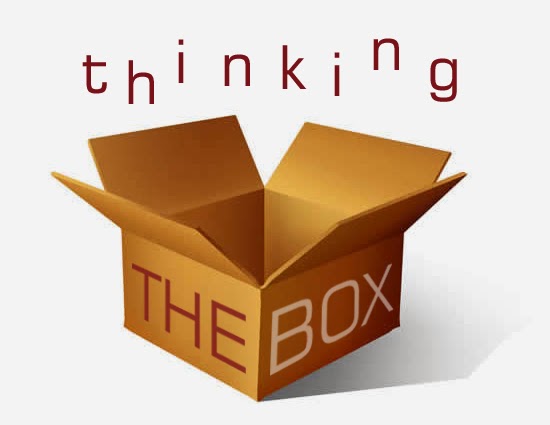 Playing Outside The Box

Peter March 23, 2015 Post Comment Uncategorised
Behold The Box – Itself!
There are countless quotes
and illustrations concerning that rather well worn phrase –
“Thinking outside the Box.”
There are also a whole variety of considerations we might be linguistically
pointed towards.
There’s our Thinking, and a whole array of variants
around thinking, the nature and the power of thought.
Then there’s The Box –
the reality and the metaphor. What is the nature of The Box, how is it being for each of us, and where is it placed,
and who places it there.
The generally held view is
that The Box is a set of restrictions,
or constraints, placed upon us by those empowered with direction. The Box is a set of limitations and
instructions placed upon us by those who we might think of, and describe as, Our Masters.

The presence of Boxes in our lives, like that, is
apparent to us from a very early age. Do it this way – don’t do it that way;
behave like this – don’t behave like that; and so on. We are being shaped
towards degrees of convention and conformity. It continues through our formal education
and we find more of it when we get out into the workplace, almost regardless of
the context of workplace.
The whole Boxy thing, it seems, is
with us every inch of the way. Unknowingly we take the structure into our minds
and model Boxiness out in the way we
think, and we support and reaffirm it through our language to ourselves.
In
terms of our inner selves we are our own Masters,
yet because of our familiarity and conformity to the Box way of Being we have
deluded ourselves into believing that we aren’t.
Then we encounter someone who
says we should “Think Outside The Box”
and we wonder what on earth that is all about. “That must be hard,” we think.
And when we first try it we might turn to ourselves and say, “Heavens – this is a
lot harder than you think.”
Yet, as Robert M Pirsig says in Zen and
the Art of Motorcycle Maintenance: An enquiry into values –
“It’s not hard if you have the right
attitudes.
It’s having the right attitudes that’s hard.”

Playing Outside The Box
The final day
of the Six Nations Rugby Championship 2015 was pre-framed and well scripted in
advance. The stage was set for something dramatic.
Three sides,
England, Ireland and Wales had each played four matches and won three. They
were separated by their aggregate points difference. Each final game was to be
played one after the other – Wales first, then Ireland and finally England.
Regardless of
venues or the opposing teams, each of these three sides needed to play a
certain way and with a certain mindset, to both win AND score above a certain
number of points, for them to have a chance of winning the overall
Championship.
Particularly in
recent years, what has separated international rugby sides from the Northern
Hemisphere compared to their Southern counterparts has been the lack of an expansive
and attacking approach to the game. Flair, taking risks and playing in an
exciting way, is not the general philosophy. Traditionally, the nearest
Northern side capable of playing THAT way has been France and they were not
front runners in the 2015 Championship.
So in the minds
of spectators, followers and TV pundits expectations and possible outcomes and
scenarios were already set.
However, all the
expectations failed to take account of one over-riding question:
What if the players were to play outside
The Box?

The Drama
Then play began
and events unfolded in a way we were not expecting.
At half time in the first match, Wales only led Italy 14-13. Convention
appeared to be the order of the day – at least in this particular contest. Then
the Welsh played an extraordinary twenty minutes or so which was to prove
decisive for those playing elsewhere later. They were unstoppable and ran out
61-20 winners –  a scoreline that far exceeded
expectations and that placed them, provisionally, well ahead of their two main
rivals.
Game two –
Scotland v Ireland. After Wales’ huge victory Ireland needed a 21 point margin
of victory to take the lead in the Championship. They won 40-10 which took them
ahead of Wales and which placed immense pressure on England in the final game.
Game three –
England v France. England needed to win by more than 26 points and although they
were 7-0 ahead after only two minutes, at the eighteen minute mark they were
15-7 behind. After an extraordinary comeback and where both sides played a huge
part in an amazing and compelling match, England won 55-35 and yet were six
points short of winning the Championship – which went to Ireland.  The England players’ body language at the end
of the game belied the fact that they had scored 55 and had beaten one of their
greatest rivals by a margin of 20. You would have thought they had been soundly
beaten.
Mental Notes
There are some
interesting points to note from all the three matches.
Wales went into
the game needing to score as many points as possible – and yet they struggled
for the first half by trying too hard, and by not paying enough attention to
just getting THEIR basic processes right. The match-changing run of total
dominance by Wales ran parallel with a period of no-thinking, no trying, and
just playing. The absorption in playing processes, collectively playing what
was unfolding around them, was total across that period of time and with all Wales’
on-field players. Interestingly, their heads collectively rose to look at the
scoreboard and take note of it just enough for them to allow Italy to score
late in the game and reduce the winning margin.
Ireland went
into the game with a different game plan to Wales – yet one they are familiar with.
Secure the win first by getting the processes right. They scored the same
number of points in each half and, once settled into their processes, dominated
Scotland. There is an interesting yet curious thing about luck in the now famous
quote by golfer Gary Player – “The harder I practice the luckier I get!”
Part of the Irish ‘good practice’ is gaining a level of dominance through basic
processes. The number of Scots errors brought about by Irish dominance was
staggering, and they even dropped the ball in the act of scoring late in the
game. Luck of the Irish – not a bit of it!
England went
into the game with a mountain to climb – to not just win, but to win by more than
26 points. They started at a gallop yet they became victims, first of trying
too hard to force things, and second to view the scoreboard with increasing
worry. At 15-7 down all their dreams, all their supporters and followers’
dreams, were going down the pan. Yet here there were signs of how and where to dig
deep when ‘on the hoof’ – to change the inevitable course of a game in your
favour.
In order to do
that it is essential for you to be totally absorbed in moment-to-moment
processes, action and what is going on round you. The game clock is irrelevant
and the scoreboard is irrelevant in these moments. You are JUST PLAYING. It
works more easily in individual sports rather than team sports, for obvious
reasons – yet in team sports you can be borne along by the momentum of your team
even if you have not initiated that momentum. Once the collective dynamic starts
to happen then it can only be diverted by individuals ‘dropping out’ of the
dynamic of the moment.
And for England,
with the clock running down and an increasingly mercurial opponent in France,
at key times certain individual players ‘dropped out’ of that dynamic and took –
often only slightly – the wrong decisions.

At the end of the day …
England were
amazing against France on the day and can take huge credit for playing in such
a manner. For their failing to win the Championship, they need to go back to
their game against Scotland, when they squandered so many scoring chances and
eventually failed to win by the best possible margin – which was to be their
nemesis.
For all these
Northern Hemisphere sides there was a huge learning on this day. There has been
a Boxy way of playing that has, for
far too long, been the accepted and acceptable norm. The players have shown
that with a change of attitude
anything is possible and that mountains CAN be climbed only if we don’t build
them into something they are not – by being Boxy.
And it is the
same for us in our own lives. We need to live and play in the same way – by treating
The Box for what it really is, and
becoming our own Masters.