The Wright Way / Uncategorised / Learning with nothing on our mind… 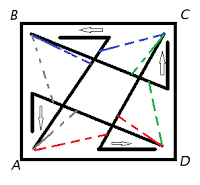 Learning with nothing on our mind…

At rugby training last evening I was prompted to use a drill I have not used for some time, and in fact this is a drill I have used perhaps only 20 times in all the time I have been a coach. It is also a drill I have never before used for ALL players regardless of their playing position or skills level. However, something compelled to me to ‘give it a go – just to see what happens’.

It involves the players working across a square grid, running and receiving and giving a pass. Simple but complex – simple in that the skills used are very basic (catching and passing while running) – complex in that there are specific lines of running, and that timing is of the essence in order for it to function with a good degree of continuity.
As less than 15% of the players had done this drill before, they went through it in slow motion (walk through) just to see how it worked. Once happy they started to do it in earnest. I said nothing and watched for a few minutes as some got it and some messed it up big time. Then I stopped them and asked “Why do you think we’re having difficulty in doing this drill?” For me there was only one answer that was going to really count and, almost on cue, out it came: “Because we’re Thick!”

Praise be for human predictability! This is something new to us, and we can’t do it. We’ve tried and failed – ergo we are thick. Every mistake we make adds proof to the belief that we’re thick. The more we try, the harder it gets – and the thicker we get. Sound familiar?

The degree of ‘Thickness’

The only thickness here, in truth, is the one related to our thinking – our thinking is thick, dense, compacted – so much so that we are not actually noticing what we are experiencing and how the experience is impacting upon us and our ability to learn. There is no clarity in our minds and insights cannot get through this mass of thick thought.

When we learn how to communicate and speak our first language it’s an evolving process like learning to walk. We learn with nothing on our mind – we just relate sounds to objects and actions to build our knowledge and we make our own sounds modelling them on what we’ve heard from others, so we can communicate back to them in a way they understand us.
We learn to do both these processes very quickly, and at no point is there a mention (let alone a judgement) of ‘thickness’. There’s no thinking getting in the way, it’s just facilitated by experience and modelling.

When I was about five we lived in the Sudan. Through experience rather than any formal learning method I could communicate in Arabic, apparently quite fluently. I learnt to communicate with nothing on my mind. Once we left the country I’d lost that faculty of language within a few months through lack of usage.
At school I learnt French, but it was from the outside>in. By this I mean that in terms of conversation, within the confines of my mind I would: hear in French > translate into English > formulate a response in English > translate into French > speak in French.
This all took place in the fraction of a second, but was still not a smooth path – until at some point when I could formulate a response in French and cut out the translation processes in the middle.

I never had trouble with sounding French because my learning method for reproducing sounds was based on a “Hear and Do” modelling process. If I’d learnt French from the outset based upon a modelling process rather than a mathematical process then I’d have got to thinking in French a lot quicker by getting all that additional thinking out of the way!

The notion that we are too old to learn something new has built up partly due to science telling us that we are at our most receptive up to some time in our twenties. The rest is down to the imposition (by self or others) of the idea that learning becomes more difficult as we get older; and that idea has become a given and perpetuating belief, accepted as a norm embedded in the thickness of our thinking.

My players’ next steps

After we’d all laughed at this conditioned response I unpacked the drill for them in a different way. “Guys this is a new drill. It involves simple skills and structured movements within a triggered time scale.

You can all walk, ride bikes, drive cars. They all involve actions built on the same framework, and they are complex sequenced actions – compared to this drill. Now, this drill can break down in one of those 3 areas of … your skills, your movements, your timing.

The easiest to deal with is the basic skills – if you pay attention to catching the ball and then passing it so that the next man can catch it easily then you are executing the simple basics of the game. The most important sensual element to help you accomplish this is Visual – so use your eyes!

The next is the structured movement – the shape of the path of movement is like a number ‘7’. You start at the bottom of the ‘7’ and follow a similar path, turning left and then stopping at the top of the ‘7’. Plus there’s a marker on the grid to show when you turn left. That’s all there is to it. Here again – use your eyes!

(The ball begins in B’s hands. The first runner is A who follows the path “up the number 7” receiving the ball from runner B and passing to runner C. When A reaches the corner of the number 7 he turns left and stops at the corner B. )

Finally it’s timing your pass and subsequent run…and this too is triggered to start when the running player goes through a particular point on his route down the ‘7’ path. Again, the eyes give you the most information. Once runner B has passed to runner A he sets off along his own ‘7’.
So every time  player at a corner passes to a runner, he then starts out to become the next runner.

You are trying to “Think and Do” at the same time, and as a result the feedback you should be getting from experience is not getting through all the thinking. If you “See and Do” instead you’ll get all the triggers, all the pathways and handle the ball properly. So it’s not about “being thick” – it’s more about being “think”. Get out of your own way, just see and act, and notice the experience without any thinking.”

They started the drill again and within a few minutes it was working perfectly.

So what are the learnings and understandings here?

Look across your life’s learning experiences and find out your most successful method of learning – the chances are it will not involve a lot of thought within the process.

Even thinking itself is a process we learn to do without being taught. The trouble is, although we’ve learnt how to think – we haven’t thought how to learn. And we are not taught how to learn either. This makes all education something of a lottery – and if you consider educational methods then it’s clear that some of them will work for some people and not others.

In most of our learning, especially as we get older, we have a tendency to get in our own way far far too much! Part of the getting in our own way is this desire, need almost, to evaluate and judge – the need to prove to ourselves how good or how thick we are. I call it ‘Compete and/or Condemn’.